A historical handshake Reporting in English 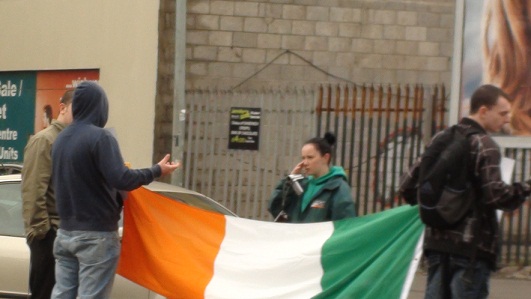 The event marks an important step on the long journey of reconciliation between the Six Counties of Northern Ireland and the British Governement, the Peace process which started with the Good Friday Agreement on 1998. On the eve of the meeting, some republicans protesters, had raised  on the Black Mountain, the hill in front of West Belfast, a huge irish flag with the inscription: “Eriu is our only queen…” A group of loyalysts came up and beat a man 50 years old with hatchets, hammer, bats and crowbars. He is in hospital in a bad way. They tore the flag up and removed the writing but were chassed  until, they dropped  it and it was returned and put back together up there. During the night, clashes in West Belfast, between police and  young people in Donegal road, at the interface between the republican district and the loyalist village area of South Belfast.
About the meeting between Elisabeth and Martin Mc Guinness, Sinn Féin president, Gerry Adams speaking outside with the Dail said : the legacy of conflict had not been brought to a conclusion but that "all in all it's a good day for Ireland".