A New Springtime For African Women Reporting in English 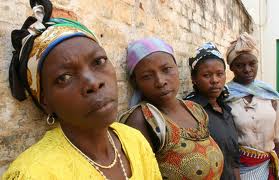 “This initiative, which began with the Euro-African Partnership project and continues today with this meeting,” said Daniela Lastri, la consigliera dell’Ufficio di presidenza, “hopes to give voice to African women in their countries of origin and ours, where many live, work, and study.”  Noting the dim statistics of female representation in the public sector, Lastri said “the increased presence of women will determine the most effective and efficient society.” Rosella Pettinati, president of the Regional Commission for Equal Opportunities, said “initiatives like this put us in a position to better understand the reality of Africa and at the same time the situation of African immigrants in our country.”  African women count for 52 percent of the total number of female immigrants living in Italy. The event, beginning with a screening of a video from the African Social Forum 2006, covered topics ranging from the Nobel Peace Price for African women to decentralized cooperation, the participation and political representation in Italy to peace and reconciliation in Africa, and was interspersed with musical contributions from Gabin Dabiré Along with Lastri and Pettinati, Eugenio Melandri (coordinator, Chiama L’Africa), Cécile Kyenge (Provincial Councillor of Modena), Diye Ndiaye (anthropologist, promoting the rights of citizenship and representing Cospe, an organization founded in Florence with the objective to overcome conditions of poverty and social injustice throughout the world), Philomene Kri (coordinator, Wuana Africa) and Afef Hagi (psychologist representing Nosotras a group of diverse women who cater to immigrant women by giving them support in daily life management and ensuring equal access to service) were a part of the panel. As a supporter of Noppaw, Melandri, spoke on the Nobel Peace Price for African women. The campaign, he said, “is rooted in the fact that African women have assumed a pivotal role in everyday life in Africa and hopes to result in the presentation of the Nobel Peace Prize to African women as a whole.” Though he recognized the idea was unusual, he believes it is imperative to recognize and enhance the crucial role women play in Africa by awarding them with the Nobel Peace Prize. On the participation and political representation of women in Italy, Councillor Kyenge stressed the need for women to be more visible. In Europe, Italy and Greece have the largest gap between male and female unemployment. Conversely, Italy is 57th for the presence of women in parliament, while Rwanda and South Africa rank first and fourth, respectively. The forum is part of a series of events hoping to continue the dialogue between women in the world and give impetus to change. “The message of African women is of great vitality and hope for the future,” said Pettinati.