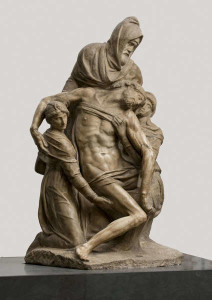 Florence – The Museo Dell’Opera Del Duomo reopens next week, after 3 years of restorative work, with a new layout and concept, designed to reconstruct the façade of the Duomo as it was during the Renaissance.

The museum consists of objects from the Duomo’s past. It first opened in 1891 and moved to its current location, across from the Duomo itself, in 1997. Forty-five million euros have gone into the making of the Museo Dell’Opera Del Duomo.

The museum reopens next Thursday, October 29, with a new vision, the vision of the Duomo’s façade as it was originally meant to be seen.

“The new concept is that these very large works, which were made to stand in open squares on grand buildings, but which in modern times have always been exhibited in small museum spaces,” Timothy Verdon, director of the Museum, said in an interview with StampToscana. “The new concept is space, a space that makes it possible to reconstruct the appearance of the never-finished first facade of the cathedral and put the statues at the correct levels.”

The new design of the museum allows viewers to see the statues of the first façade as they would have appeared on the building of the Duomo. The spacious room, which now houses these statues, is a large reconstruction of the first façade, complete with alcoves for the statues. The design places the bronze doors of the Baptistry across the room from the reconstructed façade, like the Baptistry and this façade would’ve faced each other in the Renaissance.

“They (the statues) were made for just those niches, meant to be seen at just that angle of view, meant to be seen together with the movement of light and dark,” Verdon said. “We’ve tried to give back to the statues that strongly emotional context, and then to put in front of the facade the bronze doors that were made while the facade was still on the cathedral, to allow these works to dialogue as they once did, and as they have not done since this unfinished facade was removed in 1587.”

The museum has works by masters like Donatello, Michelangelo and Ghiberti. One of the most famous pieces in the museum is the Pietà by Michelangelo. This is called his most personal Pietà because he made it to adorn the alter near where he thought he would be buried. However, the artist destroyed it after finding flaws in the marble. The sculpture was later pieced back together and transferred to the Duomo in 1722.

The new Museo Dell’Opera Del Duomo is a change for visitors to see these works of art as they would have been displayed during the Renaissance. As of October 29, 2015, this homage to the ancient art of Florence’s Duomo and Baptistry will be available to the public daily.