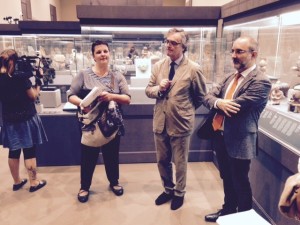 Florence – It’s difficult to believe that art from other civilizations could survive, let alone thrive, in Florence, the once-heart of the Renaissance.  But on Thursday a collection of Pre-Colombian art, one of the city’s most important art exhibits of the season, opened in Florence’s Archeological Museum.

The collection, entitled “The World That Wasn’t There. Pre-Colombian Art from the Ligabue Collection,” is mostly comprised of archeological pieces from Mesoamerica and South America.

Pre-Colombian art refers to art pieces created before or during the 15th century, when Columbus discovered the new world. This time period includes many civilizations, most notably the Maya, Inca and Aztec. The exhibit represents a world that, until 1492, Europe didn’t even know existed.

Many of the 230 pieces vary in style and function, for 5,000 years of civilization is represented within the small exhibit hall. The artifacts include representations of royal power, religious objects, personal and domestic decoration and utensils from daily life.

The majority of the artifacts are from the collection of Giancarlo Ligabue. Ligabue collected many artifacts from civilizations all over the world, but became especially interested in “the world that wasn’t there.” He then started exploring and collecting in Mesoamerica and South America. Now Ligabue possesses one of the few collections of its kind in Italy.

It was his son, Inti, who decided that his father’s collection, which had never been shown publicly, should be presented in Florence. The decision to hold the exhibit in Florence was significant, since it was in this city that the Medici family collected and preserved great works of art like these, centuries before Ligabue started his collection.

Some of the Medici’s collection is also on display alongside Ligabue’s, as well as pieces from other private collectors.

The exhibit will be on display in the Archeological Museum in the piazza Santissima Annunziata until March 6, 2016.