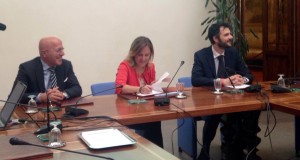 Today, members of Regione Toscana, Anci Toscana and Anbi Toscana signed a contract confirming that they will work together to prevent major flooding in Tuscany and implement new methods of flood prevention.

The three representatives who spoke on the matter today agreed that soil conservation is the most urgent matter that must be attended to in preventing a repeat of Florence’s Big Flood of 1966. All of the factors surrounding the disastrous flooding 50 years ago now may not have been determined, but members of these community organizations have began taking matters into their own hands early.

Pairing the agreement is the approval of an operational document on soil protection, which begins Tuscany’s new approach to managing water risks. As a result, 200 interventions are to come, at a total of $195-million from now until 2018.

Each of the organizations involved in the agreement will work together to aid all of Tuscany in achieving a risk mitigation, and eventually implement greater security measures by controlling and improving the river ecosystems. The process will follow 3 P’s: prevention, protection and preparation.

Each organization will do their part in ensuring a safer, more controlled future in terms of flooding prevention. Regione Toscana will be coordinating and monitoring the interventions and make sure that implementations are made according to schedule. Anbi will provide support throughout the implementation and intervention processes, and Anci will work on raising public awareness regarding these risks, as well as supporting municipalities in their implementation of the preventative methods.

The plan will involve identifying high and low risk areas, also resulting in the locations of interventions and costs allocated throughout the region.

With the #fiumisicuri tag on social media, the universality exemplified by the people of Florence back in 1966 is now being exerted once again– 50 years later.