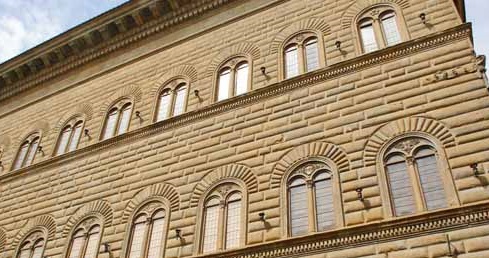 An American art collection has brought European and American unity together under one Florentine roof.

From March 19th until July 24th, Peggy and Solomon R. Guggenheim’s collections have been put on display at Palazzo Strozzi. The abstract expressionism collection, “From Kadinsky to Pollock”, features well known artists like Jackson Pollock, as well as a myriad of worldwide artists with visibly exceptional talent. The story this exhibition encompasses is one of trial and tribulation between Americans and Europeans, as told through the works presented by the Guggenheims.

Curated by Luca Massimo Barbero, and in collaboration with the Palazzo Strozzi Foundation and the Solomon R. Guggenheim Foundation in New York, an eclectic and remarkable documentation of some of the greatest art figures of the twentieth century is released to the public. The American-European even extends far back on a personal level– Palazzo Strozzi was the venue Peggy Guggenheim first chose to display her American collection to Europeans in February 1949.

The exhibition was divided into many rooms, each documenting certain eras in which the works pertained to. Sculptures and paintings depicted everything from personal emotions and awareness to social injustice and dealing with catastrophe, and show the coming together of modern art over several years, from both American and European perspectives.

A reported 111,260 visitors came by the exhibition during its first 68 days of being open, with an average of 1,636 art admirers browsing the minimalist walls and rooms daily. But what’s most interesting is the fact that the local to tourist visitor ratio isn’t too far off from even– 40% of attendees have been local Florentines (both in the city and province), and 60% have been tourists, or Italians who are not residents of Florence.

Lavinia Rinaldi, the exhibition’s media representative, describes how the unity between American and Italian artwork through this exhibit has been an intriguing success.

“Palazzo Strozzi has provided its visitors with a unique opportunity to admire more than 100 works of European and American art produced between the twenties and sixties, in a path that reconstructs relations between two sides of the ocean,” she said.

The exhibition has been an overall success, shedding light on a unique style of art that is very opposite the traditional style of Italian artwork. Both the subject of the exhibition as well as the artwork on display has left its mark on visitors.