Coronavirus: appeal of 400 intellectuals to the EU-governments Reporting in English 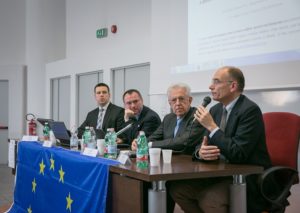 Florence – An Appeal was signed by over 400 intellectuals from all over Europe. They call upon the European Commission and Parliament to propose, and on the national governments to adopt (starting with the Eurogroup meeting of March 16, and a following extraordinary European Council to be called soon after) urgent measures in order to coordinate national responses to contrast Covid-19 epidemics.

It was promoted by philosophers Roberto Castaldi and Daniel Innerarity and signed by over 400 personalities from academia, civil society, business community, institutions from all over the EU, and even from countries still outside it.

All citizens are invited to sign this Appeal at http://www.cesue.eu/en/appeal.html.

Among the signatories are some of the most prominent European academics of their fields, think tank directors, business leaders, relevant figures from civil society, many of whom had relevant roles in institutions, including former President of the European Parliament, Commissioners, national ministers, central bankers, members of the European and National Parliaments, etc.

Here is the text of the Appeal

We European citizens understand that Covid-19 is a common threat, that may hurt one country sooner than another, but will eventually hurt us all, and can impact our daily life and economy almost like a war.
We European citizens are worried and scared by this threat; and even more by the cacophony, selfishness and self-destructive short-sightedness of the different, un-coordinated national responses; by the lack of foresight of our national leaders, who pretend not to know that our interdependence requires a single European answer with strict containment measures of the pandemics, and an EU-wide plan to re-start the European economy afterwards.
We European citizens denounce that the current EU is an incomplete Res Publica, thus ill-equipped to face this challenge, with little competences and powers to face the pandemics. We welcome the timely decision by the Commission to provide 25 billion euro and financial flexibility to cope with this threat. Maybe it’s the most it can do, but it is not enough.

We call upon the European Commission and Parliament to propose, and on the national governments to adopt (starting with the Eurogroup meeting of March 16, and a following extraordinary European Council to be called soon after) the following urgent measures, also using the Lisbon Treaty passerelle clause and simplified Treaty revision provisions:

1. Make public health and contrast to epidemics a concurrent competence of the EU, subject to the ordinary legislative procedure, and provide the Commission with extraordinary powers to coordinate the response to the epidemics, as a federal government should do.
2. Enlarge the scope of the European Stability Mechanism to finance the immediate strengthening of the European and national health systems to cope with the pandemics, which threatens the lives of European citizens, and thus also the economic and financial stability of the EU.
3. Abolish the compulsory balanced budget provision for the EU and create a EU Safe Asset to be issued to finance an EU-wide plan to promote the EU economic recovery and social cohesion during and after the emergency.
4. Move fiscal issues to the ordinary legislative procedure and provide the EU with fiscal powers to adopt new own resources – such as the carbon tax (and carbon tariffs), the digital tax, the financial transaction tax – to finance the EU budget (or the Euro-area Budgetary Instrument, if the decision could be reached only at the Euro-area level).
5. Immediately approve the next Multiannual Financial Framework increasing the budget to at least 1,3% of the EU GDP, as requested by the European Parliament, on the basis of the current structure of the budget financing; and with the provision to reach 2% with the new own resources, to ensure the provision of crucial EU-wide public goods.
6. Turn the planned Conference on the future of Europe into a fully-fledged European Convention to draft a new Constitutional Pact among the EU citizens and Member states.
We European citizens believe this is the defining hour for the EU. Social perception of the EU will be shaped for years by its response to this crisis. This is the time to prove the EU is a community of values with a shared destiny, the life-line for its citizens and member states in the face of a turbulent global world with political, economic and health threats. It’s time for bold common steps to overcome fear. It’s time for European unity, not for national division.

The Rome Summit of the Cesue

Pirates in the Navy: how to get innovation inside a large company

Florence/London - Faced with the choice ...