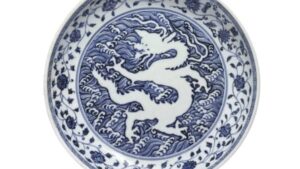 Florence – A Chinese Ming porcelain dish achieved a hammer price of a staggering DKK 46.2 million / EUR 6.2 million / USD 7.6 million (including buyer’s premium) when it was sold at auction at the Danish auction house Bruun Rasmussen on Wednesday afternoon on 2 June. It therefore also became the most expensive lot ever sold in the history of the auction house and the most expensive piece of Asian decorative art ever sold in Scandinavia.

There was a true bidding war going on in the saleroom, which was followed by roaring applause as the hammer came down at Bruun Rasmussen Auctioneers on Wednesday afternoon for an early and very rare Ming dish made of blue and white porcelain with a dragon motif. The dish landed on a hammer price of no less than DKK 46.2 million / EUR 6.2 million / USD 7.6 million (including buyer’s premium).

“We were well aware that the dish would fetch a good price and that there would be a great deal of interest in it. We were also aware that it would appeal to collectors around the world, not least in China. We had therefore also done our best to market the dish in different media. Yet, I also have to admit that our estimate was a bit off the mark, but the result itself can certainly be described as having hit the bullseye,” says Ralph Lexner, Head of the Department of Asian Art and Antiques at Bruun Rasmussen Auctioneers.

The beautiful and approximately 600-year-old antique dish comes from a prominent private collection by the Swede Salomon Sörensen (1856-1937), who for three decades worked as Malmö’s city architect and designed and built more than 100 buildings in the city with inspiration from the Renaissance period and the city of Florence. Sörensen was a passionate collector of Chinese and Japanese decorative art and had an enormous knowledge within this field.

The Dragon – a Symbol of Happiness

The motif on the dish is quite imaginative: A scaly dragon twists and turns in a rolling sea surrounded by lotus flowers. The dragon as a motif has been used in Asia for centuries, and the mythological creature is often depicted as a mixture of different animal species with, for example, a snake’s body and a lion’s head. In Chinese mythology, it is associated with happiness, nobility and strength – traits that are far removed from the legends of the Western world about dragons as frightening, fire-breathing monsters. The three-clawed version of the dragon that we encounter on this dish has traditionally been associated with nobility, where the imperial dragon is always depicted with five claws.

One of the most well-known and widely used reference works when it comes to ceramics from this part of the world is Wang Qingzheng’s “A dictionary of Chinese ceramics” from 2003, and on the cover of this book, you can see a similar dish with the three-clawed dragon, which underscores that we are dealing with an antique piece of rare quality.