Calcio Storico Revamped and Ready for Finals Reporting in English 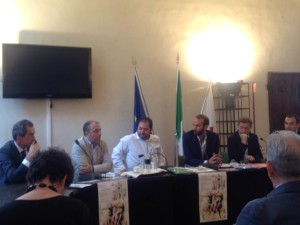 Florentine football officials came together today to discuss changes and enhancements made for the upcoming tournament.
On June 24th, in celebration of the feast day of St. John the Baptist, the annual Calcio Storico finals will be played. Countless locals and tourists came out to last year’s game to show their support, but it’s clear that more needs to be done to ensure high numbers of ticket sales, as well as gaining interest around the event in general, in order to keep this longstanding tradition a part of Florentine living for years to come.
This year, a few changes have been made to both maintain authenticity of the soccer experience, as well as encourage more excitement surrounding the city’s beloved sport.Event tickets are on sale online this year, as well as at certain participating vendors. As of yesterday morning, they’re up online for anywhere from 22-53 euros a piece. Since the semi-final dates have been decided (June 11-12), officials who spoke today would like to ensure that an equally high attendance number, if not greater, is reached as it was in previous years. They also discussed the possibilities of more audience interaction and attention-grabbing techniques surrounding the event, such as music. All in all, a general consensus of ensuring that this year’s event is well-organized and runs smoothly was the primary concern brought up.Originating in the 16th century, this legendary event takes place annually in the Piazza Santa Croce. Everyone is invited to stop by the downtown hub of Florence in order to join in on the fun and show their support for the four teams from historical Florentine neighbourhoods competing. Taking place this year will be Santa Croce in blue jerseys, Santo Spirito in white, Santa Maria Novella in red and San Giovanni in green.

The final game day will begin with a costumed parade starting in Piazza Santa Maria Novella, straight through to the games at Piazza Santa Croce. While only two of the four teams will be playing the final match, every member from each of the four teams will be pridefully making their way down the Florentine streets in spirit of the game. Post-final, the celebration will carry on over along the Arno, where spectators can catch the fireworks display set off at Piazzale Michelangelo.

Maintaining the authenticity of this traditional and unifying sport with some added excitement for locals and tourists will ensure another successful year of Calcio Storico for Florence.