Celebrating Unity: Commemorating the Big Flood of 1966 My Stamp, Reporting in English 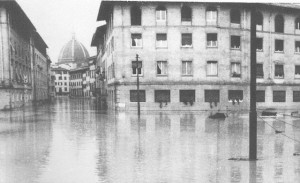 The 50th anniversary of Florence’s major flood in 1966 was commemorated today in a special book edition of Testimonianze, “La grande alluvione”.

A number of speakers took to the stage today to deliver their thoughts on this commemorative issue. Among them were directors of the Florentine newspapers, the deputy mayor, the city’s regional councillor, and the head of the Laboratory of Restoration, BNCF. The tribulations of the flood that engulfed Florence from November 4, 1966, were documented and explained by each of them, which significantly helped the audiences’ awareness as to the true effects the flood had on the city and its people.

A slideshow with videos and photos accompanied each of the presenters’ speeches, allowing the audience to get an in-depth understanding into the realities of the flood that overthrew their beloved city only half a century ago. The book even has an excerpt in which someone asks someone to visit the desolate state in which Florence had been left in, to see the significant things within the loss, and truly understand the reality of the situation. This was not an exaggeration, but a cry for help to save the sinking city. It’s elements like these that made the edition truly powerful.

Each presenter discussed the special edition’s content, the state of Florence and its people post-flood, and the research and changes that many have undergone in the past few decades to determine its causes, as well as gain awareness on the subject.

The book itself also includes several photos also included in today’s conference, and further outlined the living conditions and circumstances Florence during the mid to late ’60s. Quotes and points of views from children to older adults were also depicted in the book, which prompted further relatability and awareness. The book calls the flood a “water bomb”, which many have spent twenty plus years now researching, and emphasizes how much of a toll it truly took on the people of Florence. The streets were literal rivers, with groups of people having to paddle on makeshift boats to get from one point to another, and this problem extended through the Tuscan countryside.

While the entire event was extremely tragic, the most important thing is remembering the people of Florence’s resilience: without them banding together in order to save their city during the devastating period of having to build back up after ruin, the current state of its beauty would be truly questioned. The citizens demonstrated extraordinary capacities in working together to help one another, and the universality of these people was truly astounding. Rather than focus on the tragedies caused by the effects of the flood, today’s conference focused intently on what these individuals did to save their city, going as far as giving out water and bread to the hungry. The humanity is what should continued to be remembered and celebrated, as the speakers demonstrated today.