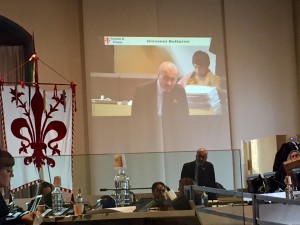 The preservation of Florence’s history may be at risk.  A heated debate between Cristina Scaletti and Giovanni Bettarini at the Palazzo Vecchio this afternoon suggests impending doom for this idyllic city’s historical future. Of all topics brought to public attention today, it is clear that the ones involving the traditions and the well-being of Florence and its inhabitants sparked most concern amongst the city council members.

In an effort to retract from some of Florence’s greatest gems and treasures, Question Time allowed impending discussions to be brought to the table. If city officials follow through with closing historic shops, what will the inevitable changes do to the historic value the city provides?

Scaletti, a doctor and politician, has had a foothold in the city’s travel and tourism industry for a few years now, and can advocate strongly for the necessity of maintaining Florence’s cultural impact. Bettarini, who rebuttled Scaletti’s speech, is a member of the City Council who is also in charge of economics and tourism development.

As a city that depends on its cultural preservation, Scaletti notes that there are countless historic shops that contribute to the local economy. A removal of them would mean a removal of the history Florence is known for. As a city that depends on its culture, and a vision inspired from years of dedication to commemorate the traditions of this city, Scaletti recognizes the important role historic shops play in Florence’s atmosphere, and vouches to fight for the shops to remain open.

While the historic shops may be attention-grabbing for tourists, Bettarini sees potential in modern additions to the city’s shopping and tourism atmosphere. He acknowledges that they have been useful in attracting customers and tourists over many years, but that what they are lacking presently is maintaining security of returning customers.

Scaletti closed the debate with acknowledging that either way, the decision to close historic shops in Florence would not be easy, and would be marked with complications. The effect that the potential closures may have remains uncertain.

Condividi
« Meningite B, a Empoli...
A Firenze aperta unità... »