Dennis Olsen from Aaron to Zeno Reporting in English 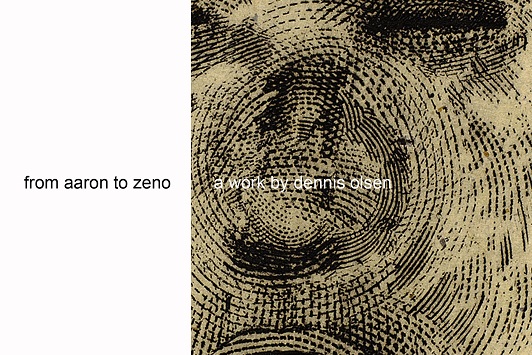 These images represent an entire body of work that has been the focus of Olsen’s attention for the past four years.  For Olsen, this is the first time that the work will be viewed together in one space. The works are not in their original format but are reproductions, produced for the exhibition in a smaller more intimate format. Framed and informally arranged in the gallery, the work reminds us of a family album situated outside of time and positioned in a fictional place, whose only common ancestor is the artist that created them.   Each portrait is titled with a name, and accompanied by a short narrative depicting a personal anecdotal history. The stories are printed in a booklet, and the spectator is invited to browse the images and read the narratives imagining the characters whose tales may be all too familiar; or to contemplate new narratives within the faces, whose lines tell a story.

In terms of subject, this work represents a clear departure for Olsen’s earlier work that often incorporated the use of text, architectural elements and imagined landscapes.  These faces emerge through a build up of marks and lines that Olsen appropriates through rubbings taken from portraits found on paper money that is scanned and manipulated to produce relief images.  While the new subject matter is in stark contrast to his earlier work, these fictive portraits relate strongly to Olsen’s use of process in the creation of his imagery.  Olsen’s background is in printmaking, but over time his work evolved, utilizing non-traditional printing techniques as well as the new technologies.  In the 1980s Olsen was creating works that were produced completely on the computer.  In 2003 Olsen ventured out of the 2D realm and began creating low relief ceramic works incorporating text. His interest in innovation is strong and at each stage of his creative development Olsen had invented and reinvented himself. The use of narrative is new to Olsen’s work, however, the fictive tales clearly draw from Olsen’s rich life and imagination.

Many have said that this is Olsen’s “capolavoro”. It is certainly the product of a life time of research that has culminated in a rich personal catalog of imagery, textures and ideas that is blended with an exhaustive life experience that spans continents. Olsen has produced a body of work that is both compelling and beautiful, filled with humor and a bit disturbing.

Bio & Background: Dennis Olsen is Professor of printmaking, drawing, and digital media at the University of Texas at San Antonio.   He received his M.A. degree from UCLA in 1967 and in that year was awarded a Fulbright grant to study printmaking in Italy.  In 1970 he co-founded the Santa Reparata Graphic Art Centre, now the Santa Reparata International School of Art (SRISA) in Florence, Italy, where he served as Director of printmaking classes until his return to the United States in 1981. He is now president of the SRISA Board of Directors.
Mr. Olsen’s work has been included in more than 160 exhibitions in the USA, Italy, Canada, Holland, France, Belgium, Mexico, Germany, Peru, Turkey, Estonia, Finland, and Russia.
The images have been shown separately in several solo exhibitions entitled “Fictive Portraits: Samplings from a Timeless Village”.  In April 2012, Olsen published a book of 35 of the images under the same title.   The books can be purchased on-line at http://www.blurb.com/books/3230832