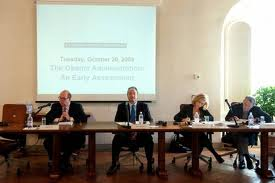 Between the probability of President Obama winning or of Governor Romney losing, there was in fact no real conjecture as to the outcome of the 2012 U.S. Presidential elections.  This Friday during the La Pietra Dialogues Post-Election Analysis Conference, one of the most interesting aspects of the past elections was discussed during the “Polling and Social Media” panel.
Starting the discussion was New York University’s Professor Joshua Tucker with a presentation that provided an overview of various polls and the multiple predictions made about its outcome. Tucker showed the audience many different polls that showed various outcomes and ways in which outcomes could occur. From polls predicting a landslide victory for Mitt Romney to those predicting a narrow win for Barack Obama, anything was possible. The distinguished professor of politics explained that diverse methodologies of statistics often lead to wrong polls, but that the more polls are available, the easier it is to find accurate results. Some on the panel, however, found this to be quite the opposite.

Joel Benenson, Obama pollster and 2008/2012 campaigner, stated that the “problem with public polls is that they’re not strategic and they promote their own brand”, furthering the idea that the overwhelming amount of different polls available are often more confusing than helpful to a great part of voters. Benenson also suggested that “everybody ought to take a big step back and let candidates run their own polls and campaigns.”

Moderator Steve McMahon, Democratic strategist and public affairs consultant, then posed the following question: do candidates’ campaigns matter if properly taken polls can predict the end of elections using economic fundamentals? McMahon himself believes that the “triumph of economic fundamentals was the overcoming of economic fundamentals.” That is, the campaign itself does make a difference because it showcases the human element of the candidates as opposed to presenting numbers on a red and blue graph. Benenson opined that the probabilities are not perfect “because it [the campaign] goes beyond this”. Nevertheless he also said, “I was confident that we were going to win from our polling,” which in fact proved fairly accurate.

The discussion about campaigns and polling soon melted into the Republican panelists’ analysis of their party’s traditionalist ideals. The audience was enthralled to hear Alex Castellanos – Republican strategist and public affairs consultant – say that “this time there was no way the Republican Party could grasp the idea that the world has changed.” On one of the previous panels, Steve Schmidt also agreed that “Republicans have some soul-searching to do on [their] social issues extremists,” a view that was generally acquiesced to by the spectators.

After an extensive dialogue on this topic, the panel arrived on the role of social media in these Presidential elections. President Obama was said to have used his resources better than Governor Romney in that aspect and this, according to the experts, greatly contributed to his victory. Michael Donilon, a media consultant and political strategist, sustained that the interaction between candidates and the voters was a key concern of the Obama campaign – something that shone through in the Democrats’ use of social media to engage Americans and powerfully present a visual of the party’s ideals on a more personal level.

Another subject of discussion, with emphasized participation from the European panelists, was the comparison between America’s use of social media and polling in the elections and its use in European elections. Dominique Simonnet, writer and former senior editor of L’Express, said “there is a big gap between the political world and voters” and the increased use of social media seemed to lessen that. Mario Calvo-Platero mentioned that in Italy there aren’t many polls and, especially this year, elections have been much more uncertain. The American system of elections in general is very traditional and there is a sense of a repeating cycle every four years that Italy does not display, in the European experts’ opinion.
The panel then concluded by answering a question about the importance of vice-presidents, Biden’s role as VP to Obama in the past and Ryan’s selection as VP candidate for Romney. The fourth section of the conference was terminated with a boisterous round of applause for these panelists and those experts that participated throughout the day.

Also discussed in this two-day conference, organized by Ellyn Toscano and the La Pietra Dialogues team, were Romney’s and Obama’s performance and tactics from the beginning of the convention, the Presidential and Vice-Presidential debates and their effect on both parties, and the role of Super Pacs and money. The conference followed up with a conversation about what comes next for Republicans, Democrats and the United States, and ended with a friendly lunch in Villa La Pietra.