Fighting for the Right to Teach: Protesting Rights and Salaries for Special Education Teachers Reporting in English 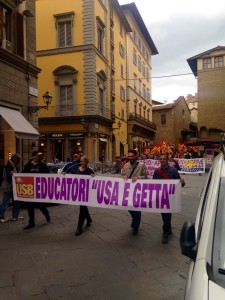 The USB (Unione Sindacale di Base) organized a strike this morning outside of the Palazzo di Parte Guelfa to protest against the outrageously low salaries for special education teachers.

Several people gathered today to state their rights and initiate change in terms of the way special needs educators are treated by the Italian administration. These educators work both at school and in the home to give extra support to students from nursery school through high school, and help them to improve on communication and social skills, and acquire general skills, making sure that these students are given an equal opportunity to learn in a way best suited for them.

As of right now, these “disposable educators” are paralleling regular teachers in order to see students succeed. However, they’re working nearly double the hours, with a 38-hour work week, at an incredulously low salary, as well as zero payment during the months in which the school is closed. Not to mention the reality that their jobs are almost always at stake of being cut due to lack of government funding abilities.

Living with this uncertainty has terrified many educators and families, and they are desperately hoping that the administration will understand the need for job security—a minimum and maximum number of work hours, adequate funding, and a stable income. As it stands, their future is very unclear, and they feel continuously overlooked by the municipality. They only exist in the City Council’s eyes for nine months of the year, and during the three months of closure, they are treated as though they have simply disappeared.

There is virtually no acceptance of responsibility for the inadequate funding here. The Italian administration is genuinely lacking funds to help support these individuals, but has not made any efforts to aid these individuals. On the contrary, they have previously resorted to cutting from workers’ wages, which shows the necessity of a reevaluation of priorities, especially in devoting more funds to public services.

The current economic system is made to leave too many people behind, and the educators have felt the effects of this brutal aftermath for far too long now. They have also been made to feel as though the city of Florence has prided itself in the work that they do, but behind closed doors, the budget cuts and restraints say much more. While many Mediterranean countries have struggled financially in the past few years, it is important that they make an effort to adapt to political and financial crises, otherwise their once strong welfare system will crumble, along with the professions of hardworking individuals. There is even a Jobs Act in place, but it only deteriorates from these educators’ rights.

While this type of work is very important, the lack of attention paid to these educators and the willingness with which the municipality will overlook these individuals calls for some drastic measures, and that is what several people brought to the Palazzo this morning.

Flags were waved in support of the action. Banners with the words “Educatori ‘Usa e Getta’, translated to “Disposable Educators” were prominently carried down the city centre streets. Homemade sheets of proclamation further emphasized the crucial need for change. The group was also led by a speaker with a megaphone, reiterating what the purpose of the strike was, and encouraging everyone to hold their heads high and walk on.

By banding together today, workers and families emphasized the need for further acknowledgement of the special needs education department within the municipality, and the people surely made their voices heard.