From the Altar to the Museum: New Exhibit Celebrates Modern Religious Art Reporting in English 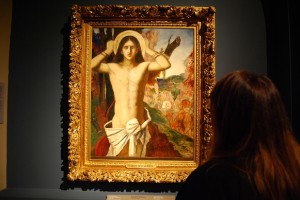 Florence – “Divine Beauty,” a modern art exhibit now on display in Palazzo Strozzi, is seeped in an ancient tradition: religion.  In fact, the only two factors that bind the more than 100 pieces of the exhibit are their time period, between mid 19th and 20th centuries, and their religious themes. Other than that, the pieces vary wildly from a postimpressionistic piece by Van Gogh to a green, silk chasuble, an outer vestment worn by Catholic clergy, made by Henri Matisse.

The exhibit, fully titled “Divine Beauty: From Van Gogh to Chagall and Fontana,” explores the relationship between art and the sacred. Before the 1860s, when Pope Pius IX openly encouraged new, innovative forms of artistic expression, the genre of sacred art was limited and excluded the modern techniques that were being discovered at the time. “Divine Beauty” celebrates the range of sacred art that blossomed after the mid 19th century.

“This [the bond between church and art] is testified by the presence of works by the most illustrious artists,” Giuseppe Card. Betori, Archbishop of Florence, wrote in an introduction for the exhibit’s book. “They are all here, at times in a controversial or discordant form, but because of this demonstrating how ignorance is impossible between art and the sacred.”

Many pieces that, at one time, would not be considered sacred, like Munich’s “Madonna,” are included in the exhibit, a testament to how far the relationship between church and art has come. The exhibit explores religious art as a genre, an art form that descended from the altar into museums and played a role in the artistic world between the 19th and 20th centuries.

The pieces of the exhibit are divided into seven sections based on theme. The first section, “From Salon to Altar,” showcases the breath of modern styles used in religious art during the second half of the 19th century, right at the cusp of the move from purely traditional sacred art.

In the second section, “Rosa Mystica,” the pieces center around the Virgin. Next is “Life of Christ,” which is divided into 4 subsections that move chronologically through Christ’s life, from the annunciation of Mary to the resurrection.

“Mural Decoration from Spirituality to Poetry” is the fourth section and has only works from Gino Severini, pieces from projects in churches around Switzerland. The fifth section, “Space, Light and Sacred Aura” contains only a video installation that explores the space of the church and depicts recent developments and renovations of religious architecture.

The sixth section is “The Church,” which highlights the church’s power. And the seventh, and last section, is “Prayer,” with scenes depicting prayer from the intimacy of home to a field of flowers on the edge of the world.

“Divine Beauty” was created to coincide with the Fifth National Bishops Conference, to be held in Florence Nov. 9-13. The exhibit will be open daily from Sept. 24, 2015 to Jan. 24, 2016. Check the website for hours and ticket prices.