Give Them Shelter: Somali Refugees Take Over Jesuit Residence Reporting in English 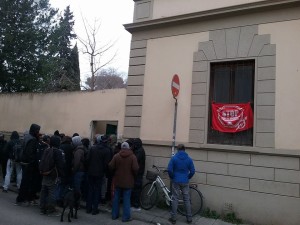 Somalian refugees have taken over a supposedly uninhabited residence near the Fondazione Stensen, with lack of anywhere else to live. The hard-hitting reality of lack of place to live has turned a not desert building  into a shelter for the displaced.

Last week, around 100 Somalians sought refuge in the once residence of the Jesuit Fathers of Florence. While the Fathers had left the residence a few years ago, leaving the building seemingly empty and unused, Padre Brovedani remained till some weeks ago because of its close proximity to the Stensen Foundation which he is the director of. Padre Brovedani understood that their options were little to none.

“What could I do when I saw those desperate people of Somalia?” he said. “We try to talk together and see how we can solve their problem, and then also begin to help solve how to begin a dialogue with the institutions of this town to solve the problem.”

Padre Ennio Brovedani of the Fondazione Stensen uncovered the story behind what locals are perceiving as a growing problem. One of the largest Florentine foundations supporting all kinds of arts, film and culture, Fondazione Stensen intends to reshape the views locals have of the recent refugee influx by working with them to give them stable shelter, but to integrate their culture into that of Florence’s.

The matter could be brought to the police, but Padre Brovedani recognizes that the refugees have nowhere else to go, and would not detract from what little they have here in Florence. He acknowledges that they have violated respect for legality, as well as that the residence has been relatively empty for years now, but the building has been eyed by buyers for quite some time– most recently, the possibility of converting the building into a school for over 200 Chinese students. Brovedani does not want to see these people robbed of their temporary housing solution, but he wants to see some mutual agreements reached in terms of a more permanent solution.

Brovedani has experienced nothing but kindness from the Somalian refugees during their search for a solution. However, they did initiate assemblies beginning last night in hopes of gaining media attention, which generated a lot of groups throughout Italy’s refugee communities to reach out and support the newest members to Florence finding a suitable home. In the mean time, Fondazione Stensen hopes to help the refugees without detrimenting their work as a cultural organization. They aim to promote co-existence of cultures, and inspire especially young people of the community, with examples led by what one can see in cultural and ethnic integration in North America.

For Padre Brovedani, the experience has been nothing short of eye-opening. The sudden influx in his residence sparked a realization that many hear about, but have not undertaken to change, as they themselves have not come face to face with the reality of displacement as he has.

“When you look into their eyes, you realize the great suffering that they have gone through. You feel the great humanitarian catastrophe of immgration.”