How Florentines Really Feel About Tourists Reporting in English 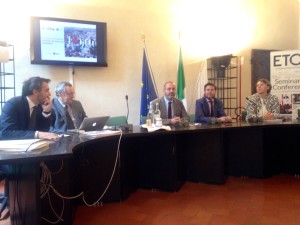 Tourism officials gathered at the Palazzo Vecchio today to discuss the future of tourism in Florence, and how it affects the locals.

Led by head of tourism, Giovanni Bettarini, director of the Tourism Studies Center, Alessandro Tortelli, and a representative of the European Tourism Association, Nick Greenfield, locals’ thoughts surrounding tourism were brought to light.

As a city with immense volumes of people flowing through daily, Florence is easily identified as a tourist-infested destination. With a population of 350,000 and an annual estimation of tourists in the city reaching as high as 16 million, it comes as no surprise that the future of tourism needs some damage control, and fast. While the city is particularly impressive to tourists, the realities of living in Florence have had some different implications for local citizens.

From April 12th to May 12th, online questionnaires and surveys were sent out to local Florentines, in order for tourism officials to get a better understanding of their perspective on tourism’s effects on the city. A study was pursued after it became clear to tourism officials that the overwhelmingly large amounts of tourists within the city does take its toll on locals living and working close to the influx. In 2015 alone, there were a reported 9.2 million overnight staying guests in the city, which plays several roles in the livelihood and upkeep of the city as a whole. The responses were nearly evenly split between male and female citizens, at 50.9% and 49.1%, with a majority of respondents being between age 31-60.

Majority of Florentines agree that the tourism sector has done wonders for the city, as it’s brought in millions annually for the local economy. It’s especially beneficial for entrepreneurial activity and employment, and acts as a sector that is highly attractive to investors. Concerning cultural impacts, majority of residents see the Florentine life and style to be that of an “actuator”.

But socially speaking, the locals are fairly unhappy about the constant congestion in almost every urban space.

80% of respondents felt negatively about tourism’s overall impact on their own lives, because of the price increases in their own everyday necessities, from groceries to services. Many also noted that the high numbers of foreign students who flock to Florence to pursue their studies has also significantly impacted their ways of life.

As a result, 77% of citizens want better planning and greater attention paid to the future of tourism development, to continue a harmonious balance between locals and tourists. 17.6% are happy with the way things are currently running, and 4.6% believe that tourism prevents the city’s further development.

Pressing questions on locals’ minds have been safety improvements, better access to the city, and sustainable urban mobility.

As Nick Greenfield put it, “tourism is complex”. Florence’s attention-grabbing architecture and historic beauty was compared to other cities like Amsterdam and their “iAmsterdam” tourist-attracting and marketing techniques that have set them apart, emphasizing further that Florence will continue to be a must-see on every traveller’s bucket list. That being said, the future of tourism in Florence continues to be bright, and with some considerations kept in mind towards the locals, this charming city will continue to open its arms to international wanderlusters.