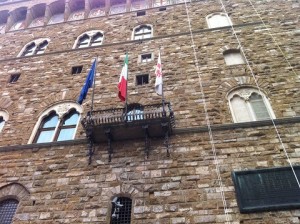 Firenze – It  was a long way to the ground on Wednesday for four local technicians as they started the process of laying copper wires to make a massive lighting protection system, encasing the Palazzo Vecchio and its tower.

Four SAEET technicians repelled from the top of the Palazzo Vecchio tower, laying wire as they descended on their ropes. The copper wires will become a part of an intertwined cage around the building, creating a giant lighting rod for the tower.

For the usual flock of tourists in the piazza, the four men repelling down the front of an ancient Italian monument may not have seemed of major consequence, but the technicians’ purpose on the facade concerns anyone who will enter Piazza della Signoria in the future. The Palazzo Vecchio and its 311-foot tower has served as Florence’s town hall for over seven centuries. The building houses the offices of the municipal administration and staff. The building also sees many tourists on a daily basis. Maintaining the safety of the people inside and outside the building is the main concern for the city of Florence.

Other concerns for the city include the potential loss of essential public services and damage to irreplaceable cultural heritage, both of which occur inside as well as around the Palazzo Vecchio.

A lightning strike to the tower could potentially cause contact shock, fire, explosion or mechanical disruption.

The city opted to use repelling technicians to attach the copper wire instead of bulky equipment in the hopes of minimizing damage to the cobblestone piazza as well as the disruption of daily life for locals and tourists.  The repelling option avoids the need to move and park heavy vehicles on the Piazza della Signoria. A similar operation was recently used successfully in the maintenance of Big Ben in London.

Over time, the copper cables that will protect the monument will become virtually indistinguishable from the stone walls as the cables oxidize. The oxidation process will also create a protective covering for the wires that will allow the lighting cage to essentially last forever, according to Luca Focardi, SAEET project manager.

The entire process, which the propelling technicians started on Wednesday, is expected to continue for about a month and a half.