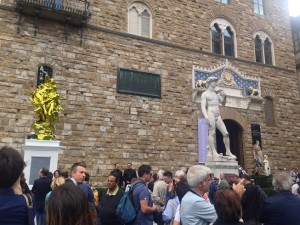 Florence – The renaissance city has played host to many modern artists and their work over the years, and now it’s welcoming another, Jeff Koons and two of his Greco-Roman inspired neo-pop sculptures.

Koons’ two pieces will be on display at the Palazzo Vecchio until December, “Pluto and Proserpina” in front of the palace and “Gazing Ball” in the Sala dei Gigli (Room of Lillies). Both sculptures stand alongside old masterpieces, creating a stark contrast between the traditional and the modern.

In a press conference on Friday, Koons remarked on Florence’s relationship with art and its ability to adapt and welcome new and different talent. It’s this ability that has kept Florence relevant in the world of modern art, even centuries after the likes of Michelangelo and Donatello.

“It shows how art has penetrated the city of Florence and how it enriches the lives of people,” Koons said, “how the lives of individuals can be changed, that people can walk on the piazza and have a new experience. They can look at the art that is around them and have more appreciation for how it affects their lives.”

Koons’ “Pluto and Proserpina,” from his “Antiquity” series, will certainly be hard to ignore amongst the crowd of sculptures in Piazza della Signoria, with it’s reflective, metallic surface. The piece is the first original sculpture to be placed in front of the Palazzo Vecchio in almost five centuries. The sculpture “Pluto and Proserpina” shows the Roman god of the underworld seising Proserpina after he spotted her gathering flowers beside a lake. Pluto later takes her back to the underworld with him. You can see Proserpina struggling in the sculpture, trying to fight Pluto off, but the way the two metallic figures seem to melt into one another makes her efforts seem helpless.

“Gazing Ball” is a plaster cast of “Barberini Faun,” an Imperial Age sculpture discovered in Rome around 1624. It was originally part of Koons’ 2013 “Gazing Ball” series, all of which were plaster casts of famous Greco-Roman sculptures with modern suburban elements added. In this case, Koons added a bright blue, reflective sphere, something you might see decorating your neighbor’s garden.

For Koons, the gazing ball symbolizes “affirmation, generosity, sense of place and joy of the senses.” The series, as a whole, is based in transcendence, with the gazing ball representing the perfection of the universe.

“Jeff Koons in Florence” is a rare chance to see the juxtaposition of the great masters, like Donatello and Michelangelo, against a modern innovator, like Koons. The exhibit also provides the opportunity to experience something new at the old palace.

The two sculptures will be on display until December 28, 2015.