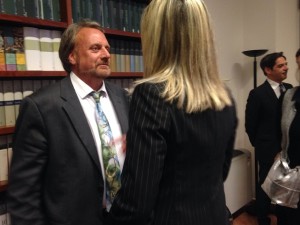 Florence – Professor Craig Holman addressed issues concerning lobbies, politics and transparency in the US and Europe this afternoon at Corriere Fiorentino.

The Government Affairs Lobbyist for Public Citizen in the United States is an expert on finance and governmental ethics, and holds a Ph.D., with several years of experience in the field under his belt. He is currently working to assist the European Union in creating a lobbyist registration system.

The conference focused on the current state of US democracy and lobbying, with many suggestions as to how Italy can benefit from an enhancement of the country’s current lobbying system.

In his publication, “Lobbying and transparency: A comparative analysis of regulatory reform”, Holman addressed the pressing issue that citizens are increasingly fearful of when it comes to democracy: who are the people and groups that have the power to influence government decisions, and how?

The inability for individuals to trust their democracy comes from the public’s realization that certain special interest groups have had the privilege to voice their concerns and gain the government’s approval, entirely for self-benefit.

Holman addressed the beginnings of public mistrust in the US when corporate lobbyists were exposed for relying on ‘revolving door’ tactics—instead of being genuinely helpful and informative to lawmakers, they turned to bribery to make themselves heard.

Members of Congress received gifts of all kinds, from luxury vacations to free meals. But lavish living through bribery came to an excrutiating end in January 2006, when well-known lobbyist, Jack Abermoff, was found guilty for bribery.

This experience is what made the Reform legislation sound like the next best bet. While ethics laws were passed for the first time in 2006, which would now forbid gifts and bribery amongst the Congress, and the Honest Leadership and Open Government Act was passed, what seemed like a step in the right direction for democracy resulted in a leap backwards.

After George Bush elected new corporatist Supreme Court judges in January 2010, all previous finance regulations were struck down. American citizens even voted in favour of allowing corporations to make expenditures, which increased outside money being brought in to the country by a fourfold. These changes all called the lobbying profession to question, because they were now regarded as the people who would determine how a political organization spends its money.

“If you rank the popularity of various professions, we even come below used car salesmen,” Holman said. “Even my own mother won’t tell the neighbours that I’m a lobbyist.”

His publication addressed lobbyists’ own understanding of their tainted image. The only way the public’s outlook will change is to provide absolute public transparency.

So with this credibility in question, the demand to establish transparency and regulate lobbyists in Europe has been brought to a major concern. Many European countries have already begun exploring their options with systems promoting the regulation of lobbyists in their local democracies. As the European democracy faces similar scandals and changes, the public’s trust continues to be at stake for both the US and for Europe.

The 2016 American election also has a reported funding of $10-billion, with one third of all funding coming through unknown sources. According to a survey Holman conducted on how Americans feel about this ‘dark money’ involved in elections, 80% are entirely repulsed, and desire transparency and reasonable limits on how much money the wealthy can deliver in campaigning.

Unfortunately, Italy is no stranger to government officials abusing funds for personal gain, either. But what this addresses is the need for an improved transparency: with stronger systems put in place, it is highly unlikely that misuse of public funding would have happened to begin with.

The US and Canada have strived to minimize corruption in their democracy by following transparency rules. Modelling after the efforts the two exemplify in order to win over the public, many European countries are now beginning to transition from weak, untrustworthy methods of lobbying built upon personal benefit, to stronger systems that encourage transparency.

Now, Europeans and Americans are currently on similar wavelengths in understanding the importance of increasing public transparency. According to Holman, the European Parliament has slowly but surely been on the right track towards having a good lobby registration and disclosure system, which they will surely continue to improve upon.

The necessity for change stems from the fact that transparency was never a central focus on anyone’s agenda. In terms of enhancing the current state of Italy’s own democracy, Holman’s advice is to focus on transparency primarily, and follow this establishment with working on controlling public financing.

“Transparency is the floor upon which you can build everything else.”