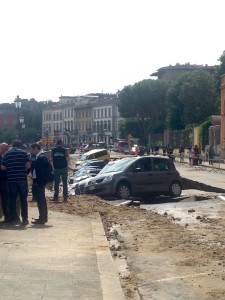 The road between Lungarno alle Grazie and Ponte Vecchio collapsed this morning after a major water pipe burst.

20 cars sank along the riverbank following the rupture at 6:30 this morning, and a couple of buildings along the road have been evacuated. Bardini Museum nearby has been closed, as well as some schools. No one was injured.

While several police, firemen, and road workers were on the scene to assist the situation, many onlookers, including those whose vehicles were identified as part of the accident, were visibly desperate for more information that the police were unable to provide.

It was suggested that erosion was a plausible factor in the sinking of the infrastructure. In the mean time, the entire road has been closed off and controlled by police, giving the city workers clearance to work on the continuously submerging road. The possibility for further caving in remains.

The first signs of disaster came at about 1:15 this morning, with some flooding of the road. By 6:15, a full on rupture overtook the parked cars and this section of the road.

As of 10:30 this morning, the flooding had appeared to be controlled, with all of the city authorities working together to calm down the individuals whose cars had sank, as well as many who were worrying beyond the caution tape.

While the problem was certainly under control, many citizens could not understand how and why this had happened.

Some spectators commented to each other on the fact that the cars will not be moved seeing as the bridge has not yet been secured. Others try to answer the unsolved questions as to how the rupture could have been caused in the first place, and what the obvious damage to the sewage system beneath the road will mean for their own homes.

The bridge may not have sunk into the water completely, but the urgency with which it is submerging is causing a growing concern for all. The onlookers are hoping that efforts to stop the water form flowing in and eroding more dirt will be attended to first.

Dario Nardella, the Mayor of Florence, stated that the primary concern is the people, and that no harm is brought to them during today’s disaster. He acknowledged that obvious damage has been done to the vehicles, and that the first preventative measures to be taken were encouraging anyone in the surrounding area to evacuate. He also stressed the importance of getting the message of the accident out beyond the city, and into the surrounding cities and towns, and that the affected area of Lungarno Torrigiani remains isolated to stop the collapse.

There is no reason to fear, according to Nardella. However, the obvious damage done so close to the city centre shows how necessary it is for the growing erosion problems along the riverbank to be taken more seriously.

Condividi
« Nell’Aretino i...
Giovanni Caccamo in... »