Magical Tuscany. Saint Galgano and The Sword in the Stone Reporting in English 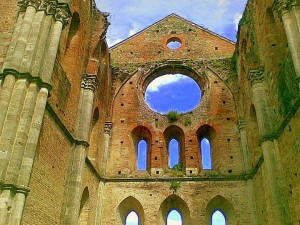 Belfast – In the heart of the Tuscany countryside, the magnificent ruins of Saint Galgano Abbey reminds the visitors of a fascinating medieval legend. Like all legends, it is inspired to a true story, the one of Galgano Guidotti, a local nobleman .

He was born in Chiusdino, a small town not far from the place where today the Abbey is located, allegedly in 1148. And as many young men of his condition, he became a knight.

Since his youth, sir Galgano was known as a ruthless, merciless fighter, but one day he made the decision to abandon everything for a better life. His friends and relatives ridiculed him, and Dionisia, his mother, bade him, at least, to pay a last visit to his fiancée. On his way there, his horse reared, throwing Galgano who fell, but suddenly he was lifted to his feet by an invisible force. A seraphic voice led him to Monte Siepi, a nearby hill.

The voice bade him to look at the top of the hill. Galgano saw a round temple with Jesus and Mary surrounded by the Apostles. The voice told him to climb the hill. When he reached the top the voice spoke again, inviting him to renounce his easy living. Galgano replied that it was easier said than done, “ as easy as splitting a rock with a sword”. So he thrust his sword at the rocky ground. The sword penetrated the living bedrock to the hilt. Dazzled by this amazing event, Galgano took up permanent residence on that hill as a humble hermit, using his sword as a cross to prey at. He led a life in poverty, just visited by the occasional peasants looking for a blessing. He befriended wild animals, and once, when the Devil sent an assassin in the guise of a monk, the wolves living with Galgano attacked the killer and, according to legend, “gnawed his bones”. Galgano Guidotti died in 1181, at the age of 33 years, and was canonized four years later. His funeral was a major event, attended by bishops of Volterra and three Cistercian abbots. The next year, the Bishop gave Monte Siepi to the Cistercian monks,. In 1185 they began building a round chapel that became known as the Cappella di Monte Siepi, on the hill above the main abbey, with the sword forming the centerpiece.

The Sword in the Stone can still be seen at the Rotonda at Montesiepi, near the ruins of San Galgano Abbey.

The Abbey (1218) was built in the classic gothic forms, with three aisles, rich with carved capitals and rose-windows, cloister, halls, bell tower. The community of Saint Galgano began the point of reference for all the territory and for the interest of the Senese Republic. In the 1789 the great Abbey was definitively abandoned and become an enormous quarry of stones and columns for all the buildings of the zone. After a few centuries the roof collapsed. From the beginning of this century, many jobs of restoration and maintenance have been undertaken, so today the magnificent San Galgano, is one of the most visited medieval monuments in Tuscany.

According to some scholars the sword in the stone would support the theory that the Celtic myth of King Arthur and his sword Excalibur developed in Italy after the death of Galgano. Nobody can explain this mistery, the sword is still there, attracting loads of visitors, as one the main threasures of this unforgettable magical piece of Tuscany.

San Galgano Abbey is located in the beautiful Val de Merse just 35 km south of Siena and can be best reached by car; it is a trip that takes approximately 50 minutes. Drive towards Rosia which is about 20 km south of Siena, take a right and then follow the signs.