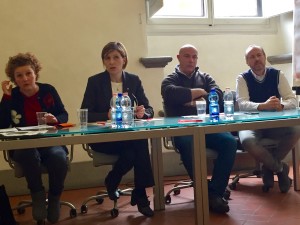 The Maggio Musicale Fiorentino is going on strike after recent layoffs of 28 theatre workers, and re-employment of one. The strike, set to take place the entire day of February 3rd, was announced this morning by secretaries of CGIL and CISL.

For years, the foundation has been battling an economic downfall which has struck the livelihood of theatre workers the hardest. While the implications of the crisis are only truly surfacing as of late, the secretaries assessed the options of waiting and seeing what results will come from the strike, or getting outside help from union representatives. The impossible debt concludes that there are extremely resources in being able to dig the foundation out of its economic hole. The only way out is a structural methodology that will somehow allow the company to cut back on its expenses, which was attempted by dismissing the 28 individuals from their jobs.

City officials are being called upon to revive the critical condition of the foundation. The seriousness of its state is coming to an unavoidable realization, and it is important that those responsible for the consuming debts and injustices for workers begin to assume responsibility. A meeting of the union groups is said to come into effect, but whether or not that will reach more solutions than simply being able to delay the timing of the strike is still in question.

Paola Galgani, secretary of CGIL Florence, sees the urgency in addressing these workers’ needs before the crisis becomes unsolvable. Galgani understands that the future of the foundation cannot carry on if the needs of its workers are not looked after. The foundation needs to be relaunched in order to save itself, otherwise a fundamental cultural institution of Florence will cease to exist.

Roberto Pistonina, secretary of CISL Florence, believes that the crisis has reached a point of no return. For Pistonina, the reality is that there is not enough staff, nor expendable funds, to sustain the foundation.

Superintendent Francesco Bianchi has also spoken out on unions’ irresponsibility after the most recent strike on January 20th. After the haphazard performances that resulted from lack of technicians and production staff, the upcoming strike will likely jeopardize performances set for February 3rd.

As of right now, no immediate action has taken place to change the impending doom of the foundation’s future. The conference addressed the fact that too much time has passed simply debating what can or cannot be done to alleviate the symptoms of the declining foundation, and may now fall into the hands of the Region of Tuscany and the Commune of Florence.