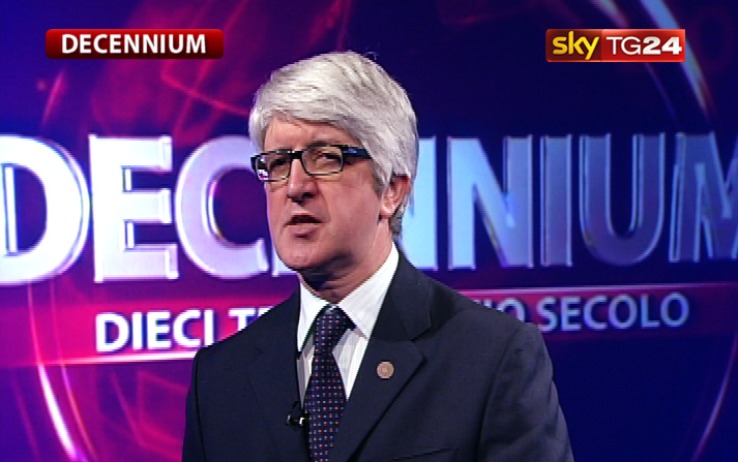 Accompanied by his signature wit and commentary, Severgnini attempted to explain the current prime minister’s regime to the largely foreign audience by comparing him to the fictional character Mary Poppins. “Italians are known  to be lively, bright, intuitive, a little lacking in discipline sometimes, but these are all comments you make about children,” he said.  “What do children need? A babysitter.” “Some of the babysitters are pretty unlikely—I wouldn’t leave my young daughter with certain babysitters,” he quipped. This is where Mario Monti (or “Mary(o) Poppins Monti” as Severgnini put it) comes in. When Mario Monti became Italian prime minister last November it seemed he could do no wrong. Borrowing costs fell and praise poured in from commentators, international bodies and political leaders on both sides of the Atlantic. His economic competence and decisive action on public finances, along with the scandals of his predecessor Silvio Berlusconi made him the ideal choice. “Berlusconi represented some of the best but much of the worst of Italy. Mario Monti is a kind of Mary Poppins but he is also Italian. He only seems extraordinary because of where we have come from.” Some have opposed Monti because he was not elected to his post. “Yes, it is true that he was not voted there but the political parties obviously thought that they needed a babysitter because their house was running amuck. It is a caretaker government,” said Severgnini. However, “The honeymoon is over,” according to Severgnini. Monti has managed to upset many in such a short time: pharmacists, lawyers, pensioners.

An article published in the Wall Street Journal titled "Surrender, Italian Style" criticized Monti’s “cave-in” over labor reform, a view that Severgnini found “unfair.” Monti still has several supporters, though it seems that they are less enthusiastic. His approval rating (even with its steady decline) is around 47 percent, much higher than the other politicians. “The Italian politician approval rate is down to 4%. Journalists, bankers, and serial killers do better than that, but just slightly. 4% means people truly despise you,” said Severgnini. He referenced the Tangentopoli uncovered in the Mani Pulite investigations (something that several of the students were surprised to learn about), saying that the comparisons between today’s political climate and that of 1992 are striking and that  politicians have lost touch with what the people want or need. “In 1992, people, in their frustration about corruption, threw change, coins, at politicians,” he said. “You know why that is not happening now? Because people need to keep their change.” For Severgnini, the outlook on Italy’s future is not completely negative.

“People, at 18-years-old, leave high school in Italy and most of them are ready to go into university anywhere. You walk into an emergency room and they take care of you free of charge, no questions asked,” he said. “That is an achievement; That is something to be proud of.” However, he acknowledged that tax reform is desperately needed in order for the country to function the way it should, saying “You cannot have good pensions, good education, good health services, and not pay taxes.”

The question remains. “Where are we going to go after we outgrow the babysitter?”

Beppe Severgnini is a writer and columnist for Corriere della Sera and the Financial Times. He is also the author of several best sellers, most recently Mamma Mia! Berlusconi's Italy explained to posterity and friends abroad. The event, “Mary(o) Monti Poppins: Just an Italian Fairytale?”, was part of the La Pietra Dialogues series hosted by NYU in Florence at Cinema Odeon.
For more information on upcoming events, visit http://www.lapietradialogues.org