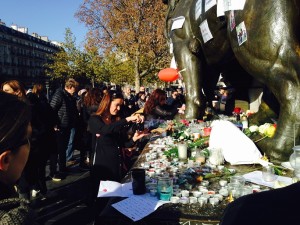 Florence – The recent attacks in Paris, and subsequent threats on other cities, has caused increased security around Europe, as well as increased fears among travelers.

On November 23 the US Department of Sate issued a worldwide travel alert for all US citizens, citing potential terrorist attacks as reason enough to stay home. But some Americans aren’t going to let threats keep them grounded. “I feel like if I’m scared to travel, then ISIS wins,” Emma Joy, an American currently living in Florence, said. “The likelihood of being killed in a mass shooting in America is greater than being killed in a terrorist attack, so I feel just as safe here as I do in America.”

But Joy says the majority of the US felt more effected by the attacks than she did.  “I think the Paris attacks succeeded in scaring a lot of Americans because Paris is a place they travel to a lot, so they felt like it could happen to them,” Joy said. “I think people in other countries get different news than what we get, so they hear about the attacks that happen in other parts of the world, like Beirut, more than we do. Also they’re closer to these other attacks. They’re more directly involved.”

Some Americans in Florence, however, did feel in necessary to return home early, or cancel travel plans in response to the attacks.

“I knew a few American students that left Florence a month early because they were scared after what happened in Paris,” Charlie van Dijk, a student from Amsterdam who’s currently studying in Florence, said. While Dijk says that Americans might feel close to the Paris attacks here in Florence, she still feels somewhat removed.

“No, I’m not afraid. And I think it’s because I’m from Europe myself. Everybody in the US thinks Europe is so close. It seems small. But to me, Paris is far away,” Dijk said. “The only thing I’m afraid of is that there will be more attacks in other places. I’m more afraid for other people.”

Even though Dijk feels certain there will be more attacks in the future, she says she won’t let her fear to limit her from traveling in the future.  Koby Shimony, an Israeli currently traveling through Europe on holiday, says the Paris attacks didn’t change his plans at all.

As for whether terrorist groups will be attacking in the future, Joy feels certain they will. “ISIS is basically getting what they want out of this,” Joy said. “So I don’t see why they wouldn’t attack again.”

For now the city of Florence, along with the people living and traveling here, seems to have gone back to normal – with the addition of few more armed guards in front of the Duomo.