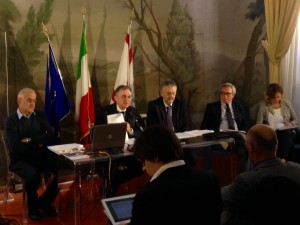 The regional president and public transit officials met at the Regione Toscana this afternoon to discuss the results of customer service satisfaction studies with Ferroviario trains in 2015.

Regional statistics studies done last year have shown that customers have been increasingly satisfied with their travels as of 2015. The survey consulted 4,750 train users, ages 14 and older, from October 17th to November 27th, 2015. Today’s conference addressed the various differences and improvements implemented by Ferroviario in order to continuously increase customer experiences, and the results have been extremely positive.

When compared with the results of 2012 customer satisfaction levels, it is very clear that there have been many positive changes made by Ferroviario in order to keep their customers happy. As of 2015, the number of ‘fully satisfied’ customers has reached 39%, with 43% continuing to remain ‘moderately satisfied’. In total, this means that 2015 saw 83% of its customers satisfied with the results of Ferroviario, compared to only 75% of clients who thought so back in 2012.

The studies also showed that 61% of Floretine travellers are women, at an average age of 32. 68% of all clients also rely on the train for work and/or study purposes, which shows how necessary it is to maintain its quality.

With this in mind, Ferroviario has worked on 10 major components in the past three years in order to improve their customer satisfaction levels, and the results have proven to be in their favour. Everything from a sense of security on board to having a place to sit down to punctuality of the train has been considered and improved upon.

Eight out of these 10 considered factors received consistently positive remarks from clients, though it’s no surprise that the train’s punctuality, as well as the cleanliness of the bathrooms, are among the most scrutinized by both regular clients and travellers. It has also been noted that regular train users have been much more critical of Ferroviario’s services than occasional travellers, and since they make up 60% of the service’s users, it has been considered highly important that they cater to fulfilling the needs of these valued customers.

Majority of clients have also been unaware of the fact that Ferroviario offers many bonuses and perks for their travellers, including being reimbursed for a trip in the event of a cancellation. In recent years, many customers have also been drawn to Ferroviario’s services through social media and online advertisements, which has also worked to significantly reign in a greater number of interested clients, and help them become more aware of what the train service has to offer.

With all of these aspects in consideration, and the obvious increases in customer satisfaction with just three years of working on doing so, there are high hopes for the continuously improving future of Ferroviario and its continuously satisfied clientele.