Soccer and Music: A Match Made in Musical Heaven? Reporting in English 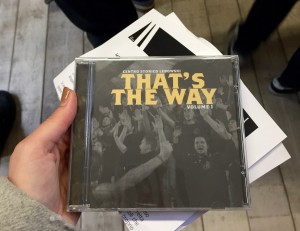 The product of a musical fusion between a historic soccer league and an independent music label was released to the public today. While soccer and music are two of the most common adorations to nearly anyone, fusing the two together may seem like an unusual pairing. The differences between a historic soccer team and an independent music label couldn’t be more vast. And yet, that is what makes “That’s the Way – Volume 1” a musical masterpiece.

This innovative approach was inspired by Black Candy Records’ Leonardo Giacomelli and Lorenzo Buzzigoli, whose ties with members of the Lebowski soccer league led to the idea of starting something unique in the music industry. With the idea to fuse the love of soccer and the passion for independent music, Black Candy Records reached out to the Lebowski Soccer School this past summer, offering to create a CD with songs from each of the bands on their record label in collaboration with the Lebowski Centro Storico.

Lebowski is a league that has defined its historical presence since the early 1980’s. The enthusiasm they brought to stadiums packed with fans led to the “ultras” phenomenon that created an uproar in the media. The die-hard fans of a team that resembled the epitome of community resulted in instances of violence and hate that left the league with a wounded reputation. Nonetheless, the league continued to fight and righteously earned its symbol of community by exemplifying the highs and lows every community experiences. Lebowski members play to inspire the sense of community within each of its fans, even if the “ultras” diminished their chances to do so.

The collaboration reinstates the sense of community that Lebowski has brought to so many people, and making their voices heard through the sounds of indie rock. The tracklist is an array of indie rock ballads, comprised by 17 bands under the Black Candy Records label. A number of the bands have direct ties to the Lebowski community, making this CD release an even more intimate experience.

Giovanni Concutelli, one of the instructors at the Lebowski Soccer School, thinks of the collaboration as more of a social gathering than just supporting a soccer team. Each of the bands featured on the tracklist are all “friends of Lebowski”, who were interested in the idea of soccer, especially that of which the Lebowski school brings to the table. From there, the interest of what musicians and a soccer league could do together came to be. Concutelli’s personal favourite on the tracklist? “The Vickers”, whose bassist is an old friend of his.

Black Candy Records’ Leonardo Giacomelli also believes that the unity of a long-supported team and an independent label is what will lead to the ultimate success of “That’s the Way – Volume 1”.

All proceeds raised will go towards the Lebowski Centro Storico. To find out more about each of these associations, and what’s to come in their collaborative future, visit www.cslebowski.it, and www.blackcandy.it.

L’Empoli torna in serie A a due giornate dal termine