State of the Union: “Europe is about the defence of multilateralism” Reporting in English 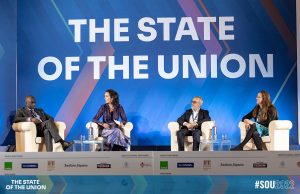 Florence – The second day of the 12th edition of The State of the Union conference gathered high-level policymakers, academics and private sector representatives at Palazzo Vecchio in Florence to discuss ‘A Europe Fit for the Next Generation?’

Roberta Metsola, President of the European Parliament, opened the conference with a sharp reflection on the current multi-crisis scenario, in particular the war in Ukraine, and role that Europe must play in a new world.

“It is our whatever-it-takes moment, a moment that comes once in a generation, a moment where we must understand that Europe is also on the streets of Bucha, in the tunnels of Mariupol, in the cellars of Irpin on the shores of Snake Island. People being brutalised are looking to us for support, for hope, even for survival. They understand that there is no alternative to Europe.”

She reminded the audience that the Union is much more than an economic bloc, stating that it is about a “shared dream, about shared values, about a shared future.” She also pointed to the need to address polarisation and foster unity.

“We must counter the anti-EU narrative that takes hold so easily and so quickly, mis- and dis-information, enhanced by bots and fabricated in Russian troll factories. Europe is about the defence of multilateralism. The understanding that we can only face the future together.”

Noting “a pre-Feb 24th reality and a post-Feb 24th reality”, Metsola emphasised that “the weight of the global democratic order now rests more heavily than ever before on Europe’s shoulders.” She also directly responded to the question posed in the title of The State of the Union conference.

“Coming out of a devastating pandemic and since Russia’s illegal and brutal assault on Ukraine, we are now at a historic crossroads. European leaders together must stand for the politics of hope, we must confront easy cynicism and stand firm against aggression and as long as we keep our priorities right I am convinced that we are fit for the next generation.”

Josep Borrell Fontelles, the High Representative of the European Union for Foreign Affairs and Security Policy, also addressed the war in Ukraine in a session on ‘Geopolitical Order and Change of Security Architecture in Europe’. When asked if we are witnessing the start of a real geopolitical European Union, he responded, “This is the moment in which the European Union is behaving as a geopolitical actor, taking decisions also on the military side, on the energy side, using the language of power.”

Elisa Ferreira, European Commissioner for Cohesion and Reforms, also spoke at the conference, detailing her direct experience with the refugee crisis caused by the war in Ukraine. “Wars bring the worst of men, but the support of refugees brings out the best of humankind.”

Referring to both the pandemic and the war, Ferreira said “This period will be remembered in European and world history as the reinforcement of our core values with a massive proof that we were on the right side of history.”

Tedros Adhanom Ghebreyesus, Director-General of the World Health Organization, addressing the health crisis specifically, called for a “Renaissance of multilateralism.”

“The pandemic has shown just how connected and interdependent we are,” he said via video message. “We have no future, but a common future. In our polarised and divided world, health is one of the few areas in which nations can work together in cooperation rather than in competition.”

The Prime Minister of Serbia, Ana Brnabić, spoke during the session ‘What European perspectives for the Western Balkans?’

“We want all of the partners in the Western Balkans to become members of the European family of nations and we want to do that quickly,” Brnabić said. “We view the EU as, first and foremost, the peace project – the most successful peace project of humanity – and we want to be part of that project. So many problems that we have in the Western Balkans would disappear if we were all to become part of the EU.”

On day two of The State of the Union conference, approximately 400 people participated in the conference in person at Palazzo Vecchio in Florence, while around 4,000 participated online.