Textile Workers vs. Pitti Uomo: The Battle for Change Reporting in English 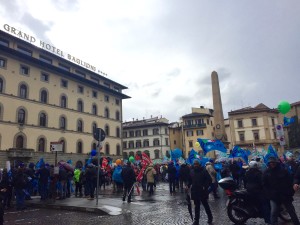 Pitti Uomo Textile Workers gathered in Piazza dell’Unita this morning to protest against unrenewed contracts and underpaid work. As the 91st edition of Pitti Uomo comes to a close, textile workers advocate for change in the heart of the city, where several hundred feet away, the exhibition holds its closing day. Workers from various different companies and organizations gathered to voice their concerns.

With Pitti Uomo consuming the local fashion industry this week, it’s a wonder that the magic behind the artistry is easily overlooked. The protest was carefully planned to coincide with the closing day of the exhibition, dominating the textile and clothing sector right now. While textile workers may be cast aside from the lavish appearance of this week’s exhibition, they were not shy in making their voices heard in protest through the city centre of Firenze. Pouring rain did not stop the thousands of workers from participating in the parade and strike around the city for several hours today. People showed their pride with gigantic flags, music and cheers. Pride filled the square in the heart of the city. A myriad of workers from various organizations including UilTec and CISIL took part in today’s demonstration in an effort to put an end to the instability overwhelming their profession.

Working under expired contracts, being asked to sign on to unfavourable conditions, and not receiving adequate compensation for their productions has created an uproar in the textile and clothing industry. Much of what these workers are creating ends up being exported around the world, as seen in reports done for the exhibition’s magazine. The profit that Pitti Uomo is reigning in causes workers to question why the lack of funds available to support their livelihood remains a problem.

All that the workers ask is an increase in salaries for employees, not having sick and vacation days cut from their work year, and no mandatory overtime and necessity of flexible work hours. Their passion and consideration to their craft does not deserve to be compromised with unfair salaries and expired contracts. One of the primary concerns of the workers is the reality of Pitti Uomo bringing in gigantic revenue for the fashion industry while simultaneously cutting costs for workers here in Italy. Italian-made products are increasingly exported worldwide, and local workers and producers are suffering the consequences. Other countries around the world are getting rich from Italian productions, while Italian workers are being unfairly compensated for what they provide. They are ready to sit down with officials and discuss the matters in which they have been overlooked.

“Made in Italy” on brands means much more to these workers than just a matter of place. It is an insurance of quality, of time, of dedication. The capabilities with fashion are recognized worldwide, so why not these workers’ dedication? They’re calling it a crisis, a destruction of their livelihood.

Every part of Italy is feeling the neglect. It’s been over a year without solid salaries and rights, and the workers are feeling abandoned. Their work is not a type that can continue unpaid, because they have families, children, homes to worry about providing for. They want to take back the meaning of “Made in Italy” and give it value again, because it lacks substance without acknowledging the creators behind the craft. They want a positive system for the workers, they don’t want this sector to be the only one in Italy that remains unpaid. And if today’s manifestation does not spark change, they will not stop from fighting.