The Demand for Youth in the Digital World My Stamp, Reporting in English 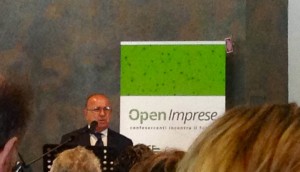 Confesercenti Firenze was awarded 3,000€ today in order to kick start their Digital Growth initiative for youth employability.
Confesercenti Toscana and Google have teamed up in a digital economy challenge, where a team of Open Imprese and Confesercenti Toscana members discussed the possibilities of Digital Growth, the initiation of digital-based internships to come to 29 different Confersercenti locations throughout the city, and access to the platform of the Company formation “in digital excellence” of the Aziende. The cheque will go toward optimization of the current state of the digital world, as discussed at the Opera di Firenze this morning.
Several different speakers took to the stage to present their angles, including Florence’s mayor, Dario Nardella, the city’s president, Enrico Rossi, and the president of the Nazionale Confesercenti, Massimo Vivoli.
The motive behind “Crescere in Digitale” is to promote youth employability through the development of digital skill sets that many young people today have not properly acquired. While they may not necessarily study or work to begin with, this initiative invests in the competence, and the capacity to learn, that the young people of Florence demonstrate, while simultaneously supporting many start-up and  flourishing companies in the digital world.
In an effort to unify youth and technological advancements, 15 interns will be selected to work for free at several different Confesercenti locations in the city, while allowing interns to implement newfound skills in digitalization to also help other online companies.
For up to six months at a time, each Confesercenti location will be monitored in terms of innovative growth, and what the interns have been able to bring to the table digitally, including a website, newsletters, apps, social media, and so on. The unpaid experiences will not only allow participating interns to explore new skill sets, but the public will also receive relatable, and understandable information, as communicated by a youthful audience.
The placements will cover seven different bases to allow growth of both the company and the intern, ranging from construction of an online presence, creating an online store, and integrating the basics of data analytics into their work.
As Mayor Nardella put it, it is necessary for all age groups to be speaking the same “language”. Therefore, with the skills that the interns will acquire during their time with Confesercenti, they will be be able to “digitize” platforms involved for individual companies, as well as combined enterprises for Natural Shopping Centres.
Increasing youth presence in the digital world will bring a new type of learning experience not only to the interns, but will give the public a chance to understand the digital sphere in a new way.