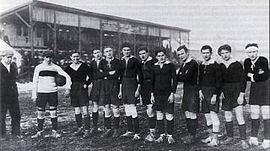 Florence – If there’s one thing that unites the people of Florence more than anything, it is the love of football. For the next two months, that appreciation is being put on display for everyone to understand the love of the game as a true Florentine does.

The Palazzo has been transformed into a beautiful museum layout, celebrating the victorious day of May 9th, 1956. The exhibition, Fiorentina 1926-1956: Le Origini, I Trionfi (Florence 1926-1956: The Origins, The Triumphs), brings the origins of the country’s beloved sport back to life, giving guests an in-depth look into the history of football in Italy. The exhibit, which opened on May 8th, will stay open daily to football fans and curious tourists until June 29th, from 10 a.m. to 6 p.m.

The exhibit was made possible by Florence’s Foundation for Sports History Museums, which is also celebrating its 19th anniversary, as well as Museo Fiorentina, and ACF Fiorentina.

Guests can immediately understand football’s importance in Italy as they step foot into the exquisitely crafted exhibition. Huge posters are spread across the walls, artifacts from the original football teams are vividly displayed, and the exhibition is spread out into a gigantic timeline of events to help visitors understand the chronology of Florence’s extensive football history, from the very first match to the international level victories.

The first section of the exhibition transports visitors to the origins of Florence’s iconic team, from 1926. Founded by Marquis Luigi Ridolfi Vay da Ber Verrazzano, the union of two teams, CS Firenze and P.G.F Libertas marked the birth of Florence’s football championship team. While the very first game was back in 1913 in Cascine, the two teams had versed each other, and became a united team as of 1926. This unity is what significantly changed the game of football in Italy.

Original footballs are on display, as well as shoes and original red and white jerseys that represented the national colours of Florence. Visitors also get to see photos of original players, read into the original playing conditions on the field, and get to know the players. They can also learn inside facts, like how the original shoes were very difficult to wear, and how the footballs were extremely heavy to play with. The spreads of information and timelines also match Florence’s national colours: the first section primarily based in red and white, while further into the exhibit, it becomes white and purple.  In addition to timelines, visitors are also shown the dates and scores of the initial Florentine games in 1926-27, exhibiting the pride the people of Florence have for their beloved team.

Moving farther into the exhibit, visitors learn about why the jerseys changed from the originally united red and white to a vibrant purple with the original crest in 1955, and about the team’s first triumphs in 1966 by winning the Mitropa Cup and the Italy Cup, as well as their follow up championship in 1968. The winning trophies are also displayed for visitors, along with the championship jerseys.

Each of the details are supplemented fluidly with the surrounding timelines and images, all of which follow the history of football very intricately. Although the exhibition prides itself in the renowned Florentine team, it also addresses the previous contender, “Il Grande Torino”, which was considered Italy’s most promising football team before a deadly plane crash in 1949.

Towards the end of the exhibit, we get to see the team that brought Florence to victory, including the president of the association at the time, Enrico Befani, and the championship coach, Fulvio Bernardini.

While Fiorentina came in 5th place in this year’s football championship, that doesn’t take away from the pride the Florentines have in their players. The exhibit put on in Palazzo Medici Riccardi demonstrates the love of the game that encompasses Florence entirely.