The World of “Mr. Gaga” Reporting in English 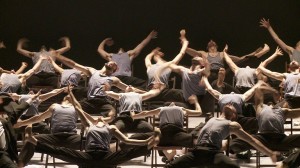 Florence – It’s 9 p.m. in Florence and the Odeon Theatre is overflowing with people, bundled in their long coats, waiting to spend their Friday in front of the big screen.

The film is “Mr. Gaga,” an entryway to the world of dancer and choreographer Ohad Naharin.

The lights dim and Naharin’s running naked with the other children of the kibbutz in Israel, and dancing in an apartment in New York City, and then back to Israel to work with the Batsheva Dance Company.

Naharin is egotistical and hardheaded, but I can forgive him those faults. He’s a true artist, striving for perfection, but never mistrusting his own point of view. His demeanor is chilling and, yet, alluring. He’s the parent or coach or teacher that’s hard on you, but you still deeply want to please. You can see it in the faces of his dancers. They hate him, but he will save them.

With documentaries about artists, I often feel overwhelmed by the darker aspects of the artists’ personal lives. The artist, as well as the film itself, puts too much stock in the hardships and the sadness and the loss. The filmmakers want the audience to buy into the idea that the artist is special, somehow set apart.

Naharin sees both the genius in himself, as well as the genius in the dancers he works with. He doesn’t set himself apart. He understands that he isn’t alone in his feelings and expressions, and he invites us to experience his world with him through his art.

The documentary interlaces Naharin’s story with clips of his choreography, drawing the correlation between Naharin’s life events and his art, which is both deeply personal and highly innovative.

The moments of dance in the film, are breaths between the forward motion of Naharin’s life. Those breaths allow the viewer to stop and take in the essence of Naharin as an artist. As the viewer starts to feel disconnected from the man, they’re introduced again to the artist, and it draws them back in.

Naharin’s choreography is filled with small movements and moments that are full of emotion. It’s about the breaths between the big actions. That lightness and intentionality of the choreography is mirrored in the documentary. The scenes aren’t rushed between the big actions of Naharin’s life. The camera lingers on the small, beautiful moments that get to the heart of what Naharin’s life and art is about.

Tomer Heymann, the director of the film, was able to convey the essence of one man and make it relatable to a wide audience of people. The film ends with Naharin’s explanation of his movement language, Gaga, a type of dance that focuses on an individual’s intentional movement. Gaga is about tapping into your own freedom of expression and allowing yourself to move naturally and instinctually.

“To morn a big loss and to dance, they don’t contradict each other,” Naharin said in the film, and that’s what Gaga does. It uses dance to help people connect to and express their inner selves.