Train of Memory: A Journey Back into the Holocaust Reporting in English 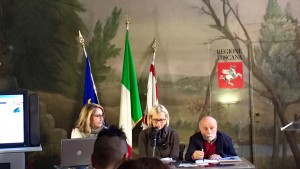 Teaching youth the importance of a historic event that both shaped and shattered a nation, Train of Memory takes students on a gripping ride through the realities of the Holocaust.

It’s impossible to understand the extent of suffering that took over countless lives. In an effort to help today’s youth have a better understanding of its extent, Regione Toscana renews its 15th annual Train of Memory: a train that will depart from Florence’s Santa Maria Novella Station and take passengers to Auschwitz-Birkenau, on a timeless journey through one of the most brutal accounts of human suffering that needs to be told.

This year’s train will be carrying 501 high schools students and 60 teachers from 59 different high schools across the Tuscany region. 60 students from 3 Tuscany universities will also be joining, bringing the total number of passengers to 750 with the inclusion of train staff. The train’s return on January 27th marks the Holocaust Memorial Day, and the liberation of Auschwitz by the Red Army.

In today’s day and age, there are an unfortunately vast amount of mysteries that remain in regards to the events and suffering that children and adults in Auschwitz lived through during the 20th century. An interest in history needs to be generated, and an interactive, hands-on learning experience like this one is the best way to go out about it, according to Regione Toscana board members.

On board, students and teachers will participate in group meetings with representatives of various Train of Memory advocate groups to learn about how the Holocaust impacted every individual differently, as Jewish inhabitants, as homosexuals, as “gypsies”, and so on. Once arriving in Oswiecim, Poland, the following day, a guided tour of the concentration camp of Auschwitz-Birkenau will take place. The students will take part in a memorial service in which they will each be assigned the name and age of an individual who either escaped or passed away in the concentration camp. The following day, the students will hear personal stories from Holocaust survivors, those deported as children, and those jailed by Nazis who live to tell their tales. The group will proceed to Auschwitz’ commemorative “Wall of Death”, with speeches made by members of the Regione Toscana and a guided tour of the Historical Museum of Auschwitz. Students will be given the opportunity to interact with Holocaust survivors, ask questions, and hear testimonies and personal memoirs, before boarding their train back to Florence.

There’s a necessity to show students the realities that may otherwise be overlooked in school curriculum. This type of experience will expose them to the world beyond the classroom learning potential, in being able to see firsthand the horrors of what was once Nazi ruling.